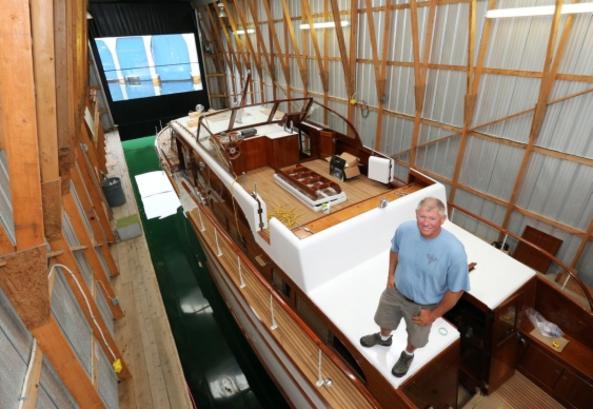 Eric Jespersen stands in the 50-foot Breezin Thru, a $1-million restoration project for an Australian customer, at his boat shed in Canoe Cove.   Photograph By ADRIAN LAM, Times Colonist

Eric Jespersen was destined to spend a life at sea. He grew up around it and represented his country racing on it at both the Olympics and America’s Cup. When he wasn’t sailing or training himself for the rigours of a competitive sailing life, Jespersen was drafted into building and repairing all manner of boats, allowing others to appreciate the water.

The owner of Jespersen Boat Builders never complained about it, and never will. “It is my hobby, my passion and vocation,” said Jespersen. Even when given the freedom to write about anything when he was young and in school, he always turned his mind and pen to boating.  “I never really considered doing anything else,” he said. Both the sport and the craft of boat building were bred in the bone.  Eric’s father, Bent Jespersen, trained as a boat builder in Denmark before immigrating to Canada.  Bent helped manufacture boats for a number of companies before striking out on his own in 1973 with Jespersen Boat Builders.   That’s where Eric, when he wasn’t sailing, started working in the late 1970s.  He would eventually take over the business when his father retired in 1995. As the company celebrates its 40th year building wooden boats on the west coast, Eric remains hopeful the firm has maintained the tradition and legacy of quality workmanship his father established.  That his workshop is filled and his six employees have plenty to do appears to be testament to that. Over its history, the firm has built nearly 40 boats and repaired or brought back to life countless others.

There are currently three projects in various stages of completion, the biggest being a $1- million reclamation project — bringing back to life the 50-foot cruiser Breezin Thru, a Monk-designed boat built in 1960 by Benson shipyard in Vancouver.  It’s a stunning bit of work, considering a few years ago the boat was considered water-logged and on its last legs before an Australian businessman wanted to breathe new life into it.  “It started as a restoration and that’s turned out to be all-encompassing,” said Jespersen, noting as one part of the boat started to look great it spurred on work on the rest of it just to match the improvements.

It’s been a two-year project that Jespersen will hand over later this summer.  He said it’s been great fun to see the boat come back to life.  “Every day you see some improvement, though really it’s only the last few days before you deliver it that all the pieces are installed at the same time,” he said.

After so much time and effort, it’s hard not to think of the boat as your own, added Jespersen.  “It’s a little like giving a kid up for adoption … you find yourself looking at the guy and thinking ‘I know you paid all the money but are you really qualified for this?’” he said with a laugh.  After more than 30 years at Van Isle Marina, Jespersen Boat Builders moved to Canoe Cove near the Swartz Bay ferry terminal a few years ago as part of a collection of complementary businesses involved in the boat building and repair industry.  While economic uncertainty has left its mark in most sectors of the economy, Jespersen said things have been steady throughout the life of the company, especially as he tries to split the work evenly between building from the ground up and repair.  “It’s really important to keep one foot in the repair end of the business, that gets you through the slow times,” he said.

What has changed a little is where the business comes from.  “Traditionally, it’s been mostly American customers and that was down to the dollar, but that’s gone away a bit with a strong Canadian dollar and [the recession of] 2008.  “But when one door closes, another opens,” he said, noting he’s seen more domestic business and clients from as far afield as Australia.  But Jespersen is candid in saying his clients tend not to feel the impact of downturns, and his business has benefited from a return to quality.  “I know I own a better barbecue than the first four I had and my car is nicer than the last one. I appreciate quality and I think that’s out there these days,” he said. “And my customers tend to be very particular.”

Jespersen said given there are so many boats available on the used market, if a client comes to him to build a boat they tend to be looking for something unique.  “If they can’t find something they like on that market, they are a very small segment of the boat market, and they are ideal customers,” he said.

In fact, when he meets with potential customers Jespersen makes sure they have exhausted the used market before he starts work. “That’s because I don’t need him at the end when I need final payment saying that he could get another boat for a third of the price,” he said.  That also goes for repair work, which can add up very quickly.  “It’s a nightmare to try and estimate costs, and if you were too coldly realistic on Day 1, no project would ever get started. [Cost] would talk them out of it,” he said with a laugh.  “You try and be optimistic and try to make sure they are in it for the long haul.”

Jespersen certainly is. Despite the prevalence of fibreglass, mass-produced boats on the market, he remains optimistic there will always be a market for high-quality and unique boats.  He likes to think there’s as much art as science in his craftsmanship — while there is plenty of engineering, there is also a “feel for what will work.”  “There is an amount of art in it, and I love that part. I don’t paint well. It is my medium for conveying my artistic ability,” he said.

“The biggest reason for that is it’s my customer’s favourite day when he sees me. It’s his disposable income, his dream we’re working on. When they visit me at their boat it’s their best day.”